The Bromoil Print is a very British expression of photographic printing. The process was invented there (see the History of Bromoil link to the right), and many of the process’s practitioners have been from Britain.  There even is a group called the Bromoil Circle of Great Britain, formed in 1931 and still going today.

Liz Kemp is no exception, from Britain, and one of a handful of people carrying on the tradition of Bromoil in Great Britain and around the world.  Why are there only a handful of artists creating bromoil prints?  Two reasons: one, it is a challenging printing method, and two: it requires not only old fashion silver gelatin paper to print on, but that paper needs to have certain specific characteristics to work well.  And there are very few, if any, commercial papers left that are suitable.

If you’re interested in a quick overview of how bromoil prints are made, follow the link at the right.

The History of Bromoil
The Bromoil Process

A Pilgrimage to Northern Ireland

Liz’s image, “A Pilgrimage to Northern Ireland” is a classic example of Bromoil.  It has history, romanticism, texture, wonderful compositional lines, and tells a story.  Starting out as a traditional black and white photographic print, bleaching and re-inking by hand allows the artist to express the photo quite differently than the original, and each print is unique.

In Liz’s image the details remain in the shadows and highlights, but with varying brush techniques the subjects are rendered quite detailed, while much of the rest of the image is given a pictorial style.  The mountains in the background have their presence shown with nebulous drama, and the lower 2/3 of the image pops with detail and depth.

Quite effective in this image are the leading lines from both the lower left and right that converge just before the pilgrams, whose journey leads one further down the road.  The sleepy, pastoral setting provides a soothing calm to the scene.  As lovely as the original image must have been, the possibilities are extended via bromoil.

Below is an example of another of Liz’s prints, shown to the left as the original silver gelatin print; two the right as the final bromoil interpretation.  The in-between stage is not shown: that of the silver gelatin print bleached, with only a whisper of image in gelatin form, awaiting the application of lithographic ink via brush.

From Silver Gelatin to Bromoil

The original silver gelatin print is a traditional darkroom print made with light-sensitive pager upon which a negative image is projected.  Areas that get more light retain gelatin and silver during developing in the darkroom, giving a sharp and classic photographic image which was the standard for 100 years of photographic prints, only to be replaced by modern inkjet printers attached to computers.

with a Bromoil print, the original silver gelatin print is bleached, removing the silver (which gives the color) and leaving the gelatin that held the silver.  When inking the print at this point with a brush/roller and lithographic ink, the ink will stick more where there is more gelatin, and be wiped/washed away more where there is less gelatin. So the artists’ brush technique is the major factor as to how the ink remains upon the gelatin. 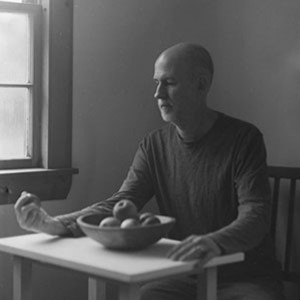 A photographic printer as well as a photographer, David’s subjects of landscapes and figure are represented by a range of historic and hybrid alternative processes.
All Posts »
Share on facebook
Share on google
Share on twitter
Share on linkedin
PrevPreviousNo Black Friday Here, but Please Do Support Artists!
NextHilary Clauss — The Edge of LightNext